There are few things in life that really inspire me as much as an awesome waterfall. I was up in Pennsylvania over Memorial Day weekend and since I had the weekend off I decided that I would go waterfall hunting in the mountains in Northeast PA. I started the hunt by visiting Ricketts Glen State Park and man do I have to say

the waterfall options here are amazing!

There are 24 named waterfalls that you will pass during a 7ish mile long hike through the park. There are other trails you can choose to visit, but the one that grabbed my attention was definitely the waterfall loop. Even though I had planned on visiting multiple parks on this trip, I ended up coming here all 3 days on top of a few other sites. Day 1 I parked at the bottom of the loop and hiked 1.8 miles up to the first waterfall. It was then a quick succession of one waterfall after another. There are 3 waterfalls before you hit the split which is the main loop. I stopped at each one and took a quick picture since the lighting wasn’t quite right at them. I had driven over from Boston that morning and arrived later in the day than I would have liked. Due to the fact that the light was heading out quickly, I decided to take a picture of each waterfall quickly, but stop and spend a bit of time when I found one that had the right lighting. 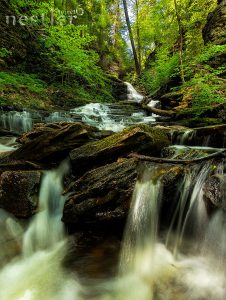 Being my first time at the park I had no clue whether the light would be better to the left or right side and I thankfully picked correctly by heading left. The third waterfall up that I came to was exactly what I had been looking for! Everyone was taking pictures from the top and quickly moving on. I climbed down under a ledge and had the perfect setup for a gorgeous picture. I shot a 16mm wide angle shot at a couple exposures and then did a quick pano so that I could do an even higher res shot later on if the picture came out as I hoped it would (it definitely did, though my poor laptop can barely handle one 50mp picture so trying to do a pano with it is out of the question). The light for the rest of the waterfall loop was ok, but had lost the magic touch that was there during the one picture so I quickly shot the rest of the falls and then headed back to the car (one poor guy had twisted his ankle really bad and had 2 buddies helping him back down the trail, but at 1.8 miles of hopping on one foot, it didn’t look fun).

It was next to impossible to find a hotel that night anywhere. I ended up driving an hour the wrong direction to the nearest hotel that had an available room. Since I had to drive by the park again on my way to Glen Onoko Waterfall trail, I decided to check it out with early morning light. I took the hike at a run since I wanted to have the option for the best lighting. I took the loop to the right and had a great time shooting some more pictures then ran back to the car for my next park. The drive was a bit tedious behind the weekend warrior rv guys who were out, but I made it in time for some decent lighting on the way up my next hike. It was much steeper than Ricketts Glen (and much busier) so it was a tougher go. I enjoyed the hike, but didn’t enjoy the shots quite as much. There were definitely some beautiful waterfalls here, but with so many people it was tough to get a clean shot. I did pull off a few, but took the non-scenic route back because I didn’t want to fight the crowds. I spent the evening going to Hickory Run State Park and got a couple cool pictures in the 18 acre boulder field at the back of the park. It was pretty cool to see and photograph back there. 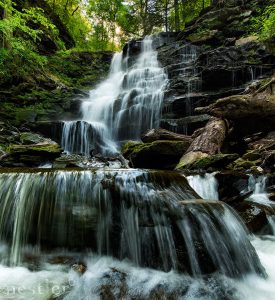 Memorial Day proper I decided to check out the Delaware water gap. Based on where I needed to be on Tuesday, I got out of my car, looked around and then headed back to Ricketts Glen. I was having a hard time figuring out what to take a picture of near the border and knew what I would be getting at the first option. I parked at the top parking lot this time around and headed down the waterfall trail. I ran into a group of Mennonites that were in the area for a wedding and we had a nice chat as I leap-frogged them taking pictures of a waterfall then zipping down the trail to the next one. Of course the perfect weather didn’t hold out. I got caught in a hail storm and torrential downpour which made for a tight squeeze under a ledge with a few other people. It eventually stopped and I finished the loop and got back to my car.

It was a fun weekend and I got a lot of great pictures of some really cool waterfalls. Definitely worth a visit if you’re in the area and I will certainly plan a trip back out here in the fall. Having some color in the leaves will really make for some awesome photos!