If given the choice, I will often forego overcrowded locations. I was very torn on whether to give Venice a wide berth or not. For my Dolomites photography adventure (part 1 | part 2 | part 3), I took the train from Caserta into Venice. I was scheduled to pick up my rental car from the airport so I needed to take a bus. While I was waiting for that to arrive, I looked around a bit at the canals and waterways. It’s such a unique looking city that I really felt like I needed to at least give it half a day.

I headed down from the Dolomites at 3am so I could make it to Venice in time for sunrise. Actually, I like to be setup for my photo an hour before sunrise. I did some research on the best spots in Venice to take photos (about 5 minutes) and Ponte Dell’Accademia was listed in numerous locations as the spot to shoot from. I didn’t realize it until I arrived, but you are not allowed to drive or even ride a bike in Venice! Not that I was planning on it, but that surprised me. You can get a 100 euro fine just for carrying a bike in the city.

There are a couple big parking garages right after the causeway so I picked the least expensive one. You do have to walk a bit further (1/4 mile), but I thought it was worth it. This one is located at the first turnoff you can take, just follow the signs for Tronchetto. I am very grateful for map programs on phones. I have a very good sense of direction (no clue where that came from), but…

Venice is a maze

I’m sure that if you spend some time in the city you’ll figure out a pattern, but it’s not obvious. Especially when you’re in a hurry. I took a turn too early or late on a few occasions and ended up at water. I assumed there would be sidewalks that followed the various canals, but nope. There are areas that have walkways along the water for those romantic strolls, but they certainly are the exception. I had to stick to my phone’s buzzing (I find the voice annoying so it just buzzes at me) rather religiously to get to my goal. Upon arrival I was the only person there.

Thankfully, most tourists are not morning people!

My primary gripe in crowded areas are the people. I don’t like crowds. Mornings are a better time to take pictures in most areas (Asia would be the exception as they all seem to get up early). The only people around me for the first 45 minutes were a group of Chinese tourists. A very nice lady from the Netherlands setup next to me just before sunrise and we had a nice talk. She had been there all week and told me that this was by far the best location to shoot the sunrise. As Lego Batman would say, “First try!”

One thing I’ve learned about visiting Italy during off-season, they all do their construction. When I arrived at the bridge I noticed a wood plank extending the length of it on both sides. This presented a problem, I wanted a clear shot of the Grand Canal without some annoying poles and wood beams in the picture. I setup my tripod in a rather precarious way to overcome this difficulty. 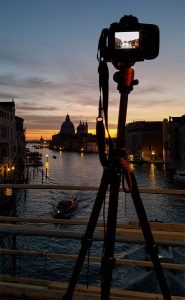 Normally when you extend your tripod legs, the base gets wider. This presents a much more stable base to work with. When you have a narrow ledge on a bridge and want to get up as high as possible, you have to get creative. I set my focal length and focus on my camera then raised the tripod up about as high as I could get it. I was forced to bring the legs relatively close together to keep all the feet on the rail. The rail was very sturdy or I don’t think I would have trusted this setup. This allowed me to get the camera up high enough to avoid the woodwork in front of me and still get the composition I wanted.

One nice feature on many of the newer cameras is the intervalometer. I set a 90 second interval and the camera would fire off a bracket of 3 images every minute and a half. Using this setup means I don’t have to touch the camera so it stays nice and steady. It also means you get a lot of pictures that are exactly the same. I’m fine with this compromise because I want at least one awesome picture.

Sitting and watching all the boats pass below me was very peaceful. It was also pretty cold. Thankfully I had left all my winter gear in my hiking pack so I pulled out some gloves and a hat while I watched the sun slowly come up. One of the Chinese guys nearby looked longingly at my gloves as he jumped up and down to get warm. Be prepared! 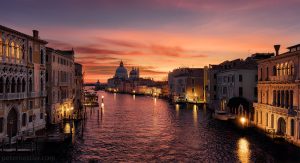 After I had gotten enough images of the Grand Canal and church in the distance, it was time to go explore Venice. I carefully grabbed my camera and began a journey to all the photograph icons on my map. Walking a lot in a city is no big deal for me. I don’t know how far I ended up going in total, but it was a pretty good distance. Noon was my train time which meant I had to have my rental car back to the airport by 10:30. No time for slacking, I had to walk fast if I wanted to see it all.

I cruised over to Rialto Bridge for a shot and it came out ok. Someone told me this would be the next best shot, but honestly, it wasn’t my favorite. It’s very historic and gorgeous, but didn’t really give me the kind of compositions I like for my pictures.

By the time I arrived at the piazza the lighting was just past where it was really workable and I was disappointed to have missed it. This would be my recommendation if you are looking for another good option. The pillars and the church…so beautiful. There are not a lot of wide open spaces in Venice for obvious reasons. This had a really cool vibe that was different from much of the city. 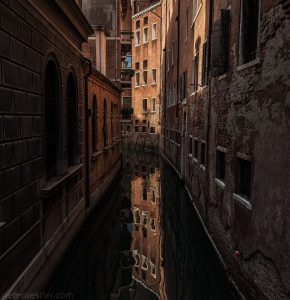 I spent the rest of my morning wandering around different streets and shooting pictures of the canals. The unique nature of the “streets” was really cool to experience. In the end, I have to say I’m really glad I decided to spend the morning exploring this historic city. I don’t think I would have enjoyed it during peak season with large swaths of tourists taking up every square inch. Early in the morning with the cold winter air? Perfect.

Venice is a standout city. Some of the coolest spots were off the beaten track…at least as much as one can get in a city made of concrete. Check out the tourist highlights, but if you have the time, wander around and see what pops out at you. You never know what you will find.