After a couple days of really awesome weather and photos (Tre Cime di Lavaredo – the Lago adventures), the remainder of my trip was a bit of a mixed bag. In the Dolomites, it’s really easy to get mountain peak overload. Overwhelmingly beautiful might be another way to put it. There are so many different locations to check out, but it helps if you can see. 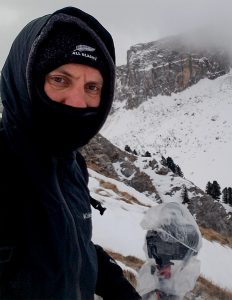 After my mediocre sunset at Lago Federa, I knew that a weather system was moving in. I got up early the next morning with the intention of shooting Passo Di Giau since it overlooks a number of peaks and valleys. When I looked outside I realized that I could see the stars. Score! I hopped in the car and raced up the winding roads to the pass. The stars were no longer visible, but I was hoping that the sun would slip in under the clouds and give me something mesmerizing to work with.

This wasn’t meant to be. I hiked through waist deep snow (mixed with icy snow pack) to an overlook of Croda da Lago. Thankfully I had my crampons to give me some reassurance I wouldn’t plunge down a steep slope (though it would have been fun at the same time). As I sat waiting for the sun to rise, the storm moved in. It wasn’t long before all my gear and I were covered in snow. Ahhh, T 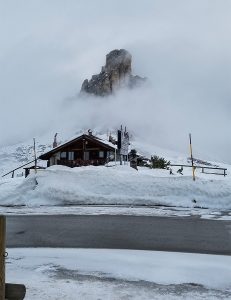 he fun of shooting in the Dolomites.

After trying a few shots, it never really cleared up. I did get to watch some animals bounding through the snow along with some birds that kept swooping by me. I ended up half running/sliding down the hill back to my car before deciding that it was best to hunker down and let my legs have a rest day.

Even though it’s not perfect for pictures, I still love the beauty of hiking in the snow. However, I did need some rest so I took it easy for the rest of the day and the following morning.

I would prefer hiking in the snow than going to a beach any day of the week! 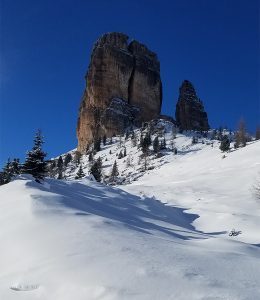 The reason why was evident the next couple of days. After getting a good sleep in, I was raring to go for sunset after the storm had passed. I hiked up past Cinque Torri which was entirely in the snow. In fact, I ended up on a ski slope on accident. Even though the ski lifts were not operating yet, there were quite a few people up there. The hill looked nice so I could see why they went through the effort. I got a few decent sunset pictures up here before heading back down to the car. 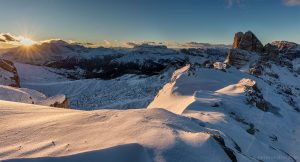 The next morning I woke up extra early because I really wanted to get some shots near the odle mountain range of the Dolomites. I wasn’t able to get anywhere near where I wanted for this picture since the snow was too high (due to all the snow makers that were going on every hill you could see). I settled on a spot that was just off the highway at Passo Gardena. The color this morning was out of this world and I loved how the light caressed the snow. 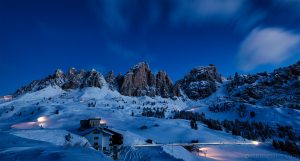 Every time I set up the camera to shoot I would run back and forth to try and stay warm. Run is a bit of a misnomer since the snow was waist deep. Waddle through the snow is probably more apt a description. It was something like -13 out this morning. Worth it, but I was ready for the car.

spent the rest of the day driving around this part of the Dolomites enjoying the awesome views. This led me to a difficult decision…where to shoot sunset. I came across numerous possible options, but finally picked an overview of the town I had been staying in all week. Cortina D’Ampezzo is a small town that sits right in the valley of numerous mountains. It is such a beautiful little Italian city that is surrounded by a truly breathtaking landscape.

The mountains were surrounded by a nice pink hue from the setting sun. It made for a picturesque finish for my time up here. I debated long and hard about shooting the following sunrise in the Dolomites as well, but since I had never visited Venice I thought I would give that a go before my train ride back south.