After an exhausting (and totally rewarding) first day in Tre Cime di Lavaredo, I decided to take it easy for the second day. Since I didn’t arrive back to the apartment until almost 11pm I really didn’t plan to wake up for sunrise. My body had other plans. As much as I wanted to sleep, I still awoke at 5am. Since I was up already, I might as well go check out Lago di Braies for sunrise. It would be an hour drive and very little walking.

I hopped in the car and headed that way. With my early start and late arrival, I still hadn’t seen any of the mountains that surrounded the small town I was staying in. I still couldn’t see much, but I started to get a peak at the outlines of the impressive Dolomites as the sky slowly shifted from black to an early blue hour. This place is beautiful!

Just know that if you ever want to visit this area, the roads are very windy and even a few kilometers can take a fair amount of time to traverse. This turned into a problem as I saw some color start to appear in the sky and I still had some distance to go. I hit the gas on my little fiat and started driving like a real Italian.

I was flying around corners and going as fast as I could. Though in typical fashion for Italy, people were still passing me. Such is the driving up here. I only have so much bravery in a rental car where the roads are covered in ice and snow.

Thankfully my speed increase got me to Lago di Braies while the sky still had some life in it. I grabbed my backpack and did my funny little run shuffle to the lake. I specify this since it’s hard to run properly when you have a hiking pack on your back.

This Area is Breathtaking! 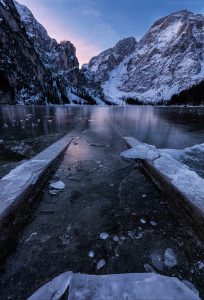 In case you haven’t figured it out, Lago is Italian for Lake. Normally you see pictures of this area during the summer. The wood beams in the water normally have a staircase that leads down to them which gives the appearance of going on forever into the water. Apparently they remove the staircase in winter when the lago freezes over. I did not know this until I arrived.

Going to a popular location out of season always has it’s risks. This turned out to be one of the downsides to coming here in winter. I still loved seeing this famous lake and got a fantastic sunrise picture out of my visit. If I get the chance, I will try to visit in the fall or spring to get a more traditional looking shot here. The iced over lago did have some cool texture to work with and I love the pink hues creeping over the mountains. On the plus side, I only saw 2 other people here all morning.

After finishing up my picture taking adventures here, I was hungry! I forgot to mention that on Thanksgiving I ate a total of 4oz of beef jerky, a blueberry fig bar and some water. Italy is not known for it’s convenient hours at grocery stores. The running joke that I heard from people is that Italians only work when they feel like it. That means opening late, closing early and going on siesta from 1-4. Not very convenient hours if you’re running and gunning like I was.

I found a small grocery store where I could stock up on some food. I then headed back to my apartment to eat a hot meal and figure out what I was going to do for sunset. My approach to visiting areas is not as organized as most. I have a rough idea of where I want to go, but like to play it by ear when I get somewhere. This has worked for and against me over the years, but generally it has been a good thing. I’m not too keen on having every picture exactly the same as everyone else.

Lago Federa – 20% is less than Awesome 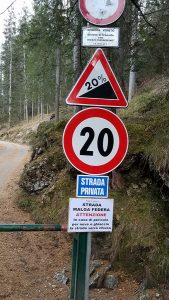 I wasn’t really feeling a long drive so I hunted for something close by. Lago Federa looked like it would be pretty close, but did require a 6km hike each way. My legs were feeling a little better than they had when I woke up so I figured I would give it a go. There are 2 primary ways to access this lake. One involved hiking down from the top (a lot more driving and I found out the following morning that the snow would have been prohibitive). The other meant hiking up from the bottom. Since I was game for a shorter drive, I chose the bottom route.

I parked the car at a gate I came to and saw a sign that was a good indication of the pain I was going to experience. 20% grade. Ouch! I assumed that it meant only part of the way so I could live with it. I was wrong. Pretty much the entire hike was 20% uphill hiking. My legs really were hurting the next morning. 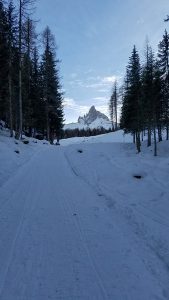 I spent the next 2 hours pounding snow up this monstrosity of a trail. The trail itself was actually a road almost all the way up, so it was easy to follow. The icy patches and steep incline are what made it miserable. On the positive side: the view was phenomenal! You can see mountains at almost every turn and that’s why one goes to visit the Dolomites.

My legs were definitely complaining for a good portion of this hike, but I eventually got to the top. The trail stayed steep almost until the last step so even seeing my objective wasn’t much consolation. I did reach the lago with a bit of time to spare before sunset. Unfortunately, the sunset really didn’t offer much to work with so I don’t have any high quality images to show for all the hiking. I shot a bunch, but nothing that I would really do anything with.

The other thing I noticed upon arrival:

This is not the greatest spot to photograph in the winter

I have seen images from this area in the fall and it looked amazing. The lake was completely covered in a couple feet of snow and all the trees had lost their leaves. It was definitely worth checking out, but I would strongly suggest doing this hike when there is some color in the foreground.

My backup plan was to try and do a starscape image since that might make up for the lack of a sunset. Sadly this did not work out either because a haze of clouds filtered in about the time I needed the sky to be clear. Oh well, not every attempt ends up working. I hiked down significantly faster than I was able to go up the road.

Lakes in winter are a hit or miss venture. I got some great photos with the iced over beauty of Lago di Braies, but nothing to show for it with the snow covered Lago Federa. They were both great places to visit and I would definitely go back, but my suggestion would be to try and hit them in the fall.

With weary legs I crawled into bed. I needed a day off and tomorrow it was forecast to snow and rain all day. Maybe that would finally happen.